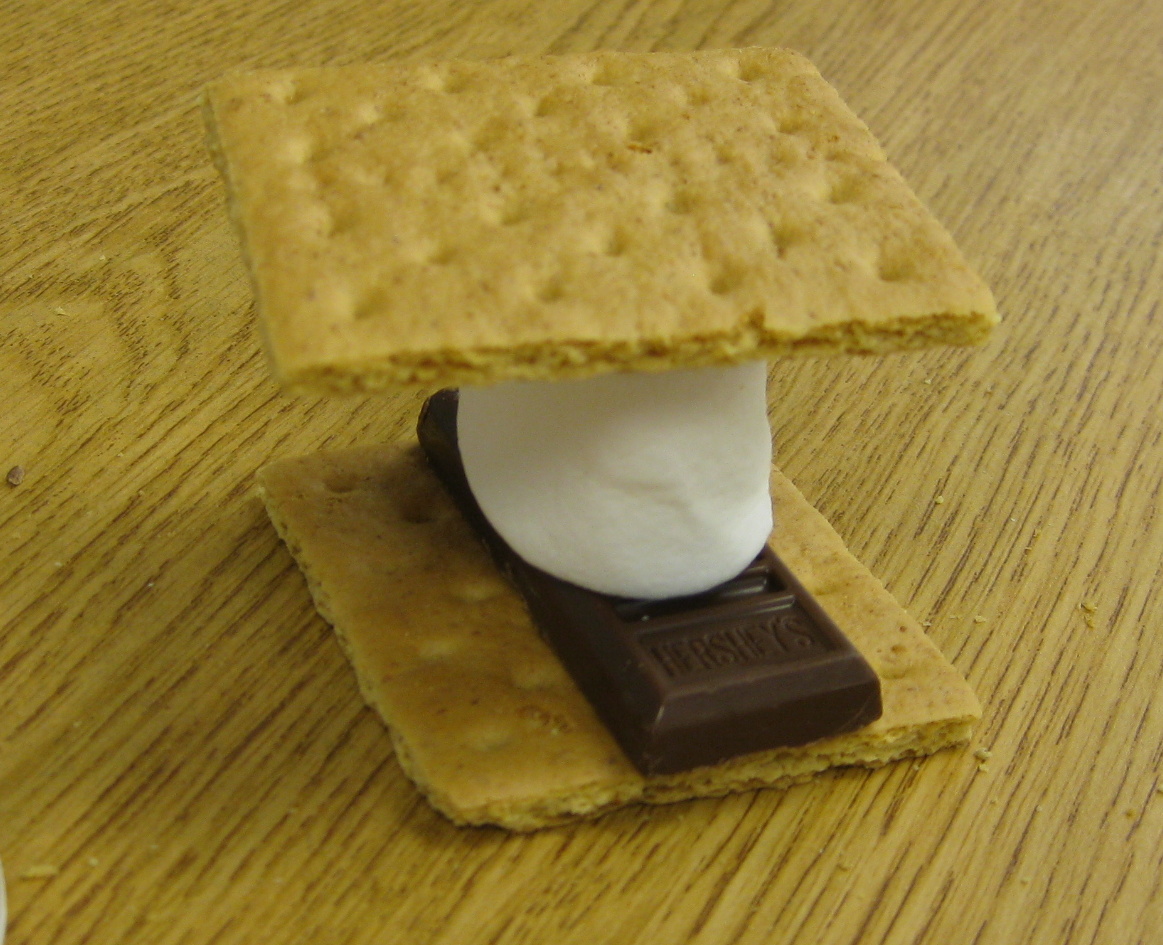 Stoichiometry can be a challenge if not initally introduced in very simple terms.  In this approach we utilize the popular campfire treat, the smores, to provide an easy to grasp means of introducing stoichiometry.  It is very important to emphasize the idea that stioichiometry is nothing more than using a recipe to predict an amount of product that could potentially be produced from the recipe.

The items you'll need for this activity include:  graham crackers, snack-sized chocolate bars, marshmallows, votive candles or some other source of heat (a microwave works, too!) matches or a lighter and some metal forks or other means of supporting the marshmallow over the candle.  We suggest you use sheets of newspaper beneath the candle to make clean-up easier. 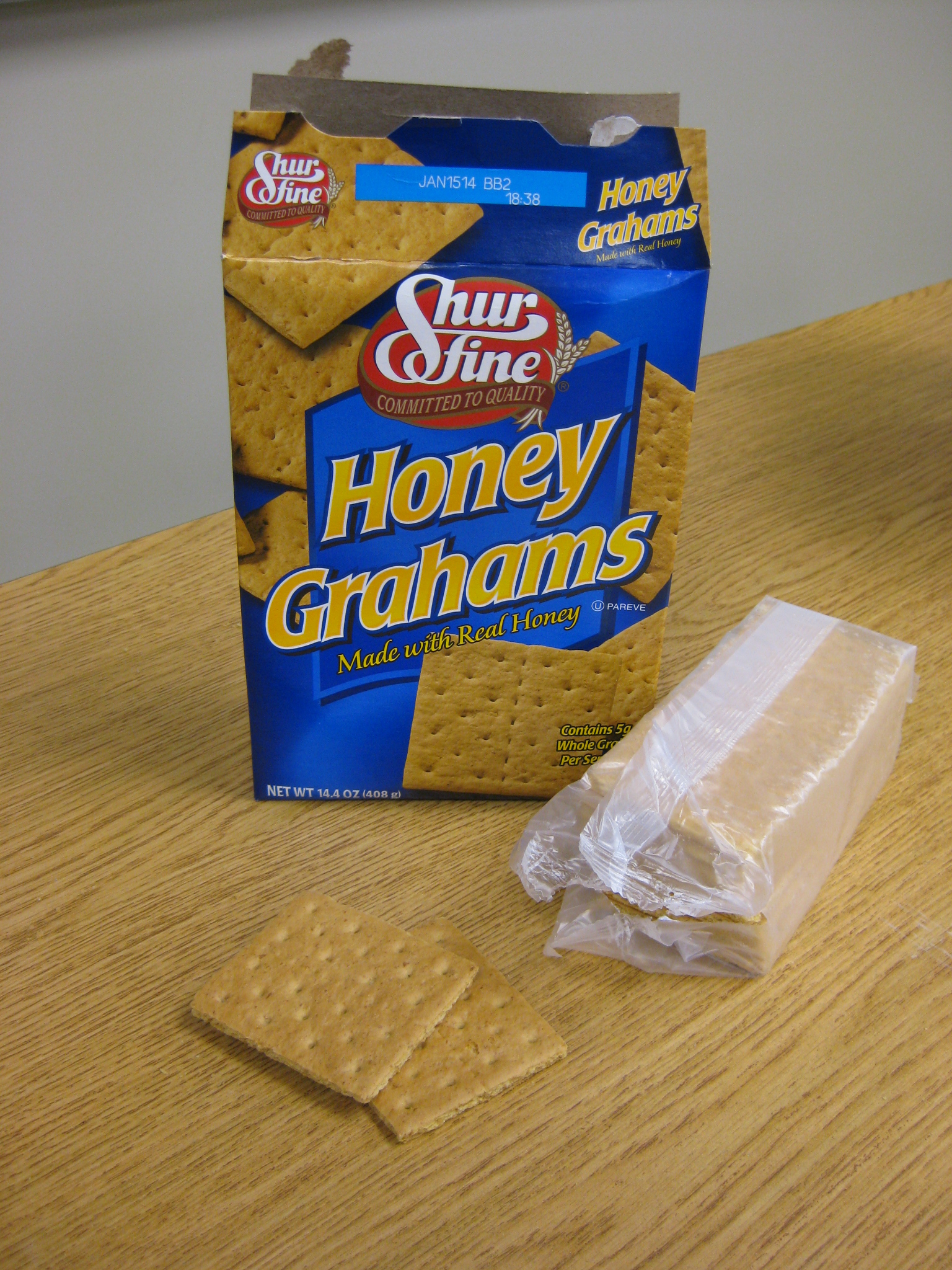 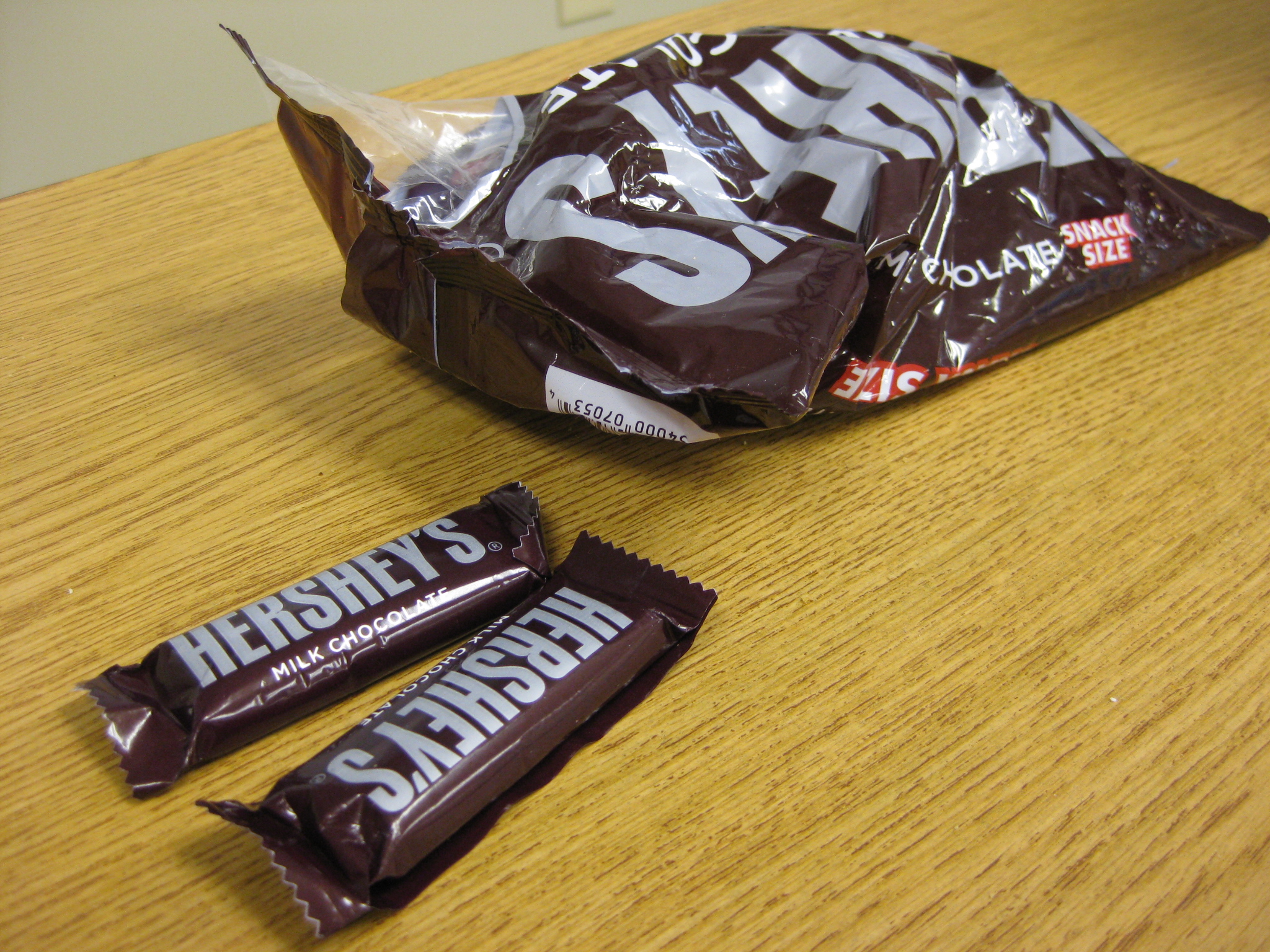 As with any stoichometric problem, the first thing one needs to do is write the correct recipe.  In this case, we'll give our reactants, symbols resembling element symbols as follows:  the graham crackers will be GC, the chocolate bars will be CB and the marshmallows, MM.  The product from the "reaction" which is the smores can be labled as SMRZ.

After writing the components of the recipe (or reaction), the next step is to balance the reaction.  In this case, we insert how many of each reactant we need to make our desired smores.  Our reaction looks like this:

After emphasizing the reactants and product amounts of the reaction, we then pose this question, "If you had 4 graham crackers (4GC) and plenty of all the remaining reactants, how many SMRZ could you produce from the reaction?"  Most of your students will readily respond with the answer of 2 SMRZ.  Now ask them, "How did you know if would produce 2 SMRZ?"  They should answer with something like, "Well, we knew it takes two GC to make one smores, therefore four GC could make 2 smores."  Point out that they utilized the coefficients out front of each reactant and product to give their answer.

Make the transition in terms now to using "moles" of each "reactant."  In other words, state that the "recipe" calls for 2 moles of GC, 1 mole of CB and 1 mole of MM to produce 1 mole of SMRZ.

At this point, you can point out the mole ratio between the two reaction components you've questioned about (the number of SMRZ  you can produce from 4 GC).  Show your students that the mole ratio between the GCs and the SMRZs is a 2:1 ratio (it takes 2 GC for every 1 SMRZ produced).  Then, substitute the amount of 4 that you're asking about into the ratio.  Hopefully, your students will readily see this correlation.

Now, ask them to predict how many SMRZ they could produce from 8 GCs.  Point out the mole ratio once again of 2:1.  Substitute an "8" into the ratio and show them how you would predict 4 SMRZ as the answer to the question.

Next, ask them to predict the amount of SMRZ they could produce from two CBs.  First, point out the mole ratio (1:1) and state that it takes 1 CB to produce 1 SMRZ.  Two CB's should then produce 2 SMRZ.  Vary the amount of  CBs and ask for the predicted amount of SMRZ.  Work through several combinations of reactants and predicted amounts of potential products.  Emphasize that in chemistry, instead of  using chocolate bars and marshmallows, we'll use chemical compounds!  The logic behind the predictions stays the same!

Finally, have your students light their candles, insert their forks into their marshmallows and get them toasted!  Remind them of being safe with open flames and what to do if the marshmallow should catch on fire.  Having a bucket or pitcher of water handy is a good idea.  If using matches, have an extra container ready for the used matches.

Do you have ideas and photos to share with other Friendly Chemistry users?  Send them to us at our email address below and we'll post them for others to see.